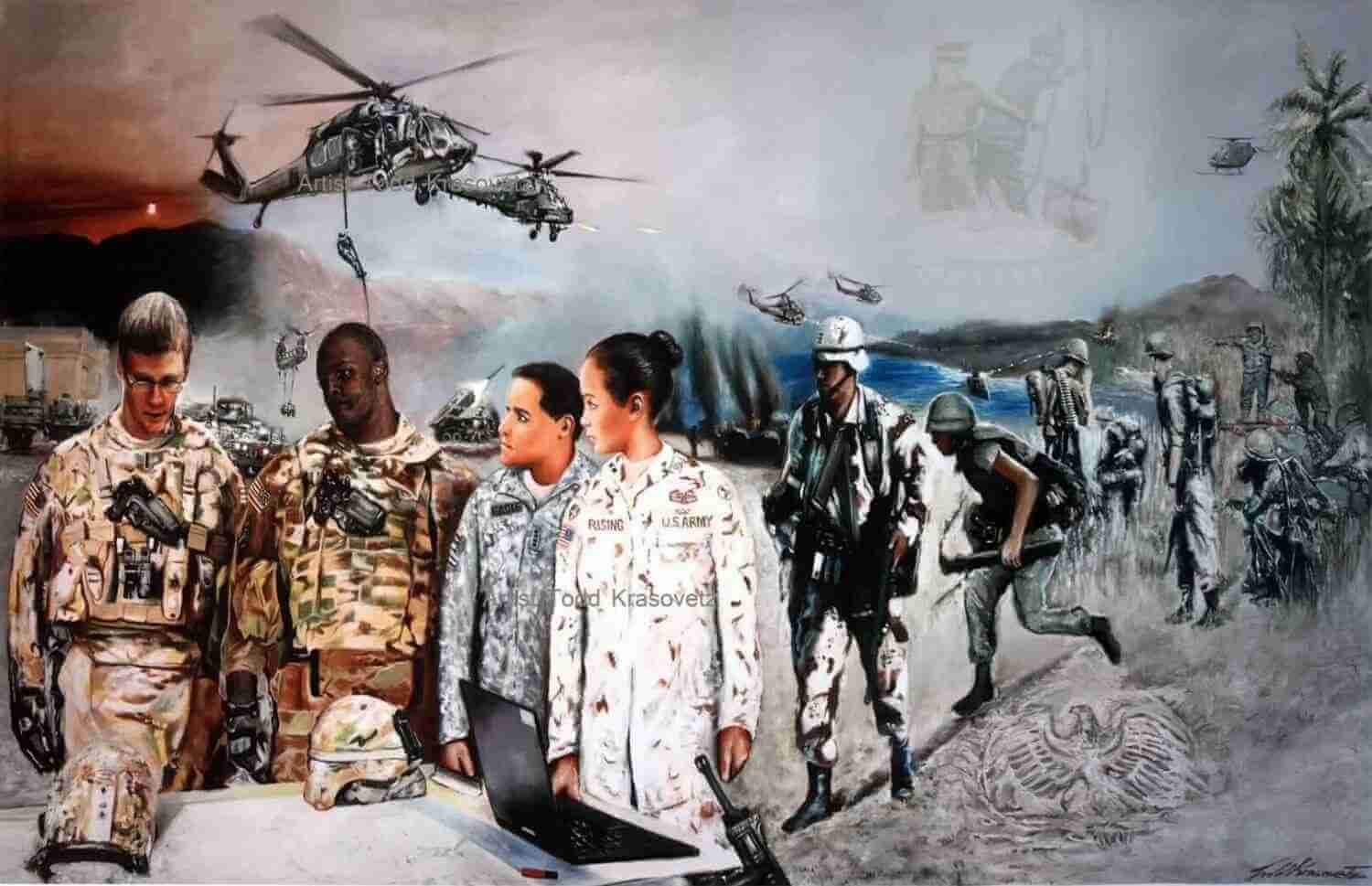 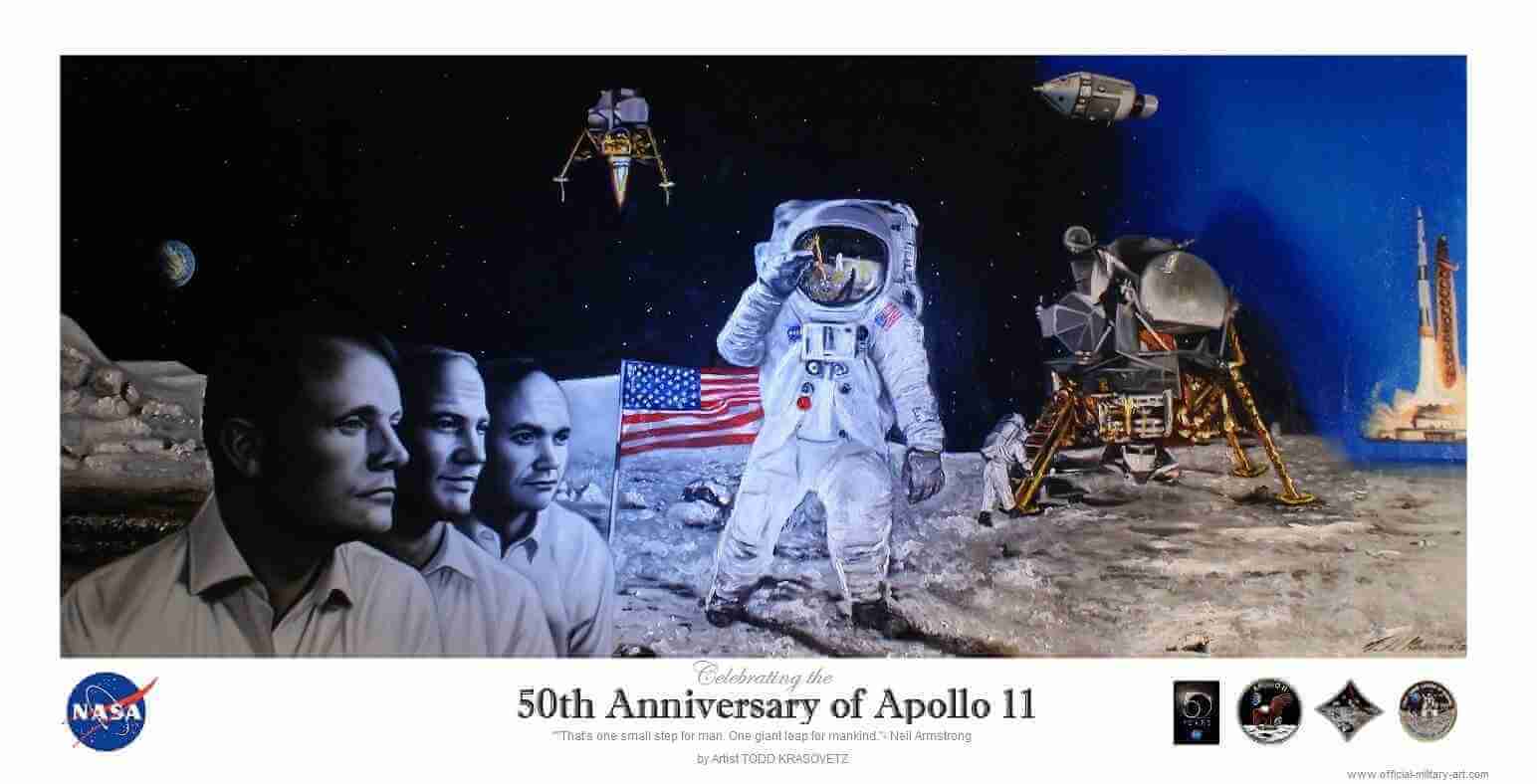 Artist Todd Krasovetz Paint’s NASA’s 50th Anniversary Of The Apollo 11 Lunar Landing.  The original will be donated in July of 2019. PRE-ORDER Prints NOW

Apollo 11 was the first manned mission to land on the Moon. The first steps by humans on another planetary body were taken by Neil Armstrong and Buzz Aldrin on July 20, 1969. The astronauts also returned to Earth the first samples from another planetary body. Apollo 11 achieved its primary mission. This was to perform a manned lunar landing and return the mission safely to Earth. The mission success of Apollo 11 paved the way for the Apollo lunar landing missions to follow.

The Apollo 11 spacecraft was launched from Cape Kennedy at 13:32:00 UT on July 16, 1969. After 2 hr and 33 min in Earth orbit, the S-IVB engine was reignited for acceleration of the spacecraft to the velocity required for Earth gravity escape.

Lunar-orbit insertion began at 75:50 ground elapsed time (GET). The spacecraft was placed in an elliptical orbit (61 by 169 nautical miles), inclined 1.25 degrees to the lunar equatorial plane. At 80:12 GET, the service module propulsion system was reignited, and the orbit was made nearly circular (66 by 54 nautical miles) above the surface of the Moon. Each orbit took two hours. Photographs taken from lunar orbit provided broad views for the study of regional lunar geology.

The lunar module (LM), with Astronauts Armstrong and Aldrin aboard, was undocked from the command-service module (CSM) at 100:14 GET, following a thorough check of all the LM systems. At 101:36 GET, the LM descent engine was fired for approximately 29 seconds, and the descent to the lunar surface began. At 102:33 GET, the LM descent engine was started for the last time and burned until touchdown on the lunar surface. Eagle landed on the Moon 102 hr, 45 min and 40 sec after launch.

Immediately after landing on the Moon, Armstrong and Aldrin prepared the LM for liftoff as a contingency measure. Following the meal, a scheduled sleep period was postponed at the astronauts’ request, and the astronauts began preparations for descent to the lunar surface.

Astronaut Armstrong emerged from the spacecraft first. While descending, he released the Modularized Equipment Stowage Assembly (MESA).  This is where the surface television camera was stowed.  The camera recorded humankind’s first step on the Moon at 109:24:19 GET (artist picture above). A sample of lunar surface material was collected and stowed away. If a contingency required, an early end to the planned surface activities could be required. This is to secure samples of lunar surface material would be returned to Earth and as a result Astronaut Aldrin subsequently descended to the lunar surface.

The astronauts carried out the planned sequence of activities that included deployment of a Solar Wind Composition (SWC) experiment. This included the collection of a larger sample of lunar material, panoramic photographs of the region near the landing site and the lunar horizon. These truly are stunning closeup photographs of in place lunar surface material, deployment of a Laser-Ranging Retroreflector (LRRR) and a Passive Seismic Experiment Package (PSEP), and collection of two core-tube samples of the lunar surface.

Approximately two and a quarter hours after descending to the surface, the astronauts began preparations to reenter the LM.  After which the astronauts slept. The ascent from the lunar surface began at 124:22 GET, 21 hours and 36 minutes after the lunar landing. In transearth coast only one of four planned midcourse corrections was required. The CM entered the atmosphere of the Earth with a velocity of 36,194 feet per second (11,032 meters per second) and landed in the Pacific Ocean.

From October 2018 through December 2022, NASA will mark the 50th anniversary of the Apollo Program. This landed a dozen Americans on the moon between July 1969 and December 1972. NASA unveiled an official logo for use in observing these milestone anniversaries Friday at the Kennedy Center for the Performing Arts in Washington.

The unveiling was part of “NSO Pops: Space, the Next Frontier,” a National Symphony Orchestra celebration of NASA’s 60 years of accomplishment.

The Apollo 50th anniversary logo is available for download from the NASA Images and Video Library.

Created by NASA graphic artist Matthew Skeins, the logo offers a nod to the past. It does have a few elements borrowed from the original program emblem. The new logo gives us a glimpse into the future with a graphic depiction of NASA’s vision for the next half-century of deep space exploration.

The arc through the word “Apollo” represents Earth’s limb, or horizon, as seen from a spacecraft. It serves as a reminder of how the first views of Earth from the Moon. This is one of NASA’s crowning achievements. It forever transformed the way we see ourselves as human beings. It affirms NASA’s intention to continue pushing the boundaries and the promise of American ingenuity and leadership in space.

The original Apollo emblem was adopted by the program in 1965. It used drawings of the Moon and Earth linked by a double trajectory. This was to portray President John F. Kennedy’s goal of “putting a man on the moon and returning him safely to the earth”. This goal was achieved by the end of the 1960s.

With your purchase, you get museum-quality art framed print from 50 different print sizes and seven different papers.   Each print is produced using archival inks guaranteed to last for 75 years without fading or loss of color. Learn More