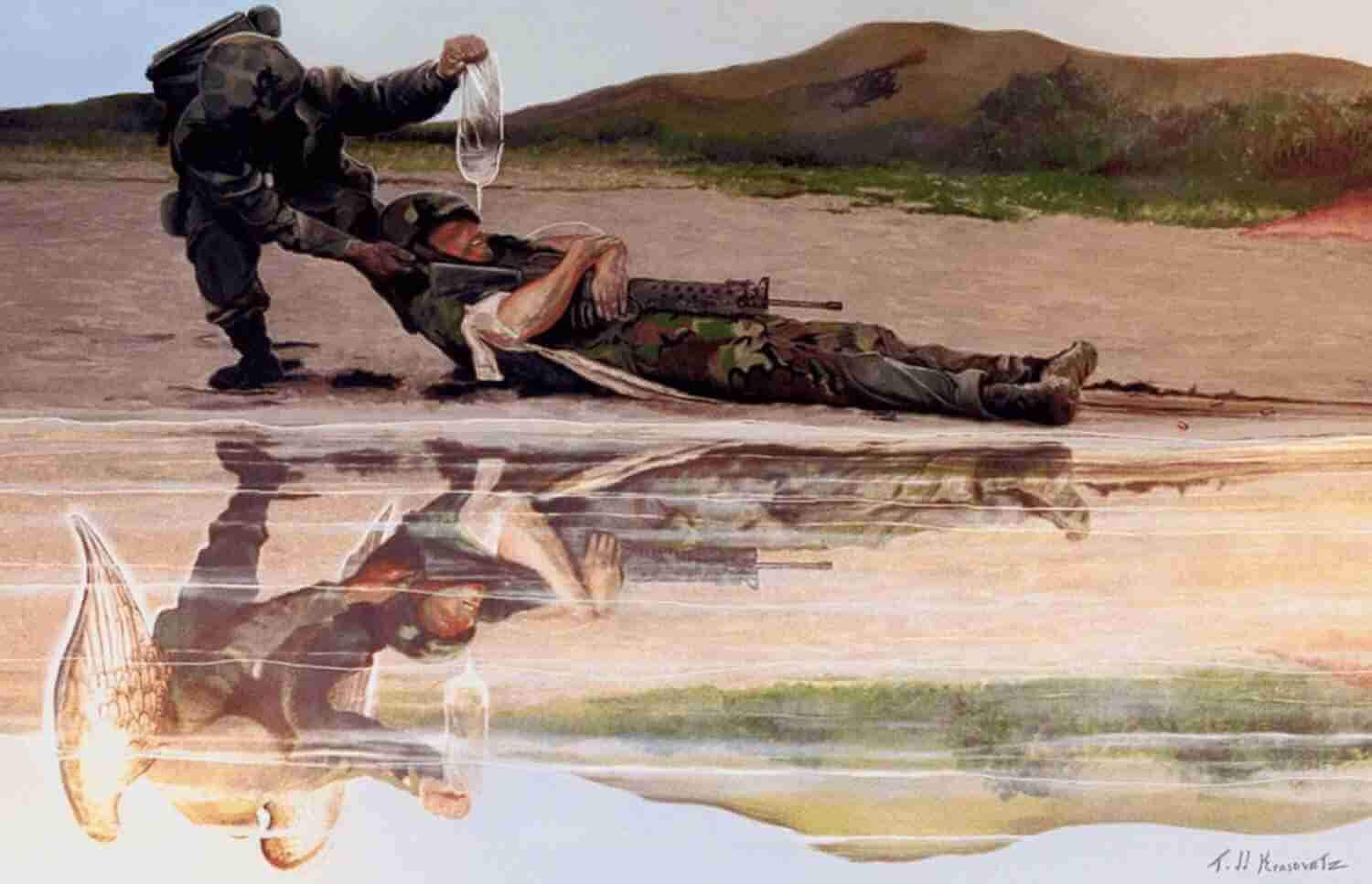 The Battle of Takur Ghar was a short but intense military engagement between United States special operations forces and al Qaedainsurgents fought in March 2002, atop Takur Ghar mountain, Afghanistan. For the U.S. side, the battle proved the deadliest entanglement of Operation Anaconda, an effort early in the war in Afghanistan to rout al Qaeda forces from the Shahi-Kot Valley and Arma Mountains. The battle saw three helicopter landings by the U.S. on the mountain top, each greeted by direct assault from al Qaeda forces. Although Takur Ghar was eventually taken, seven U.S. service members were killed and many wounded. In honor of the first casualty of the battle, Navy SEAL Neil C. Roberts, the battle is also known as the Battle of Roberts Ridge

The Battle at Roberts Ridge

In the late evening of March 3, a SFOD Team(Under command of Lt. Col. Blaber), MAKO 30 , a SEAL team, MAKO 31 (Under command of SCPO “Slab”Slabinski), and an MSOT (Under command of 1Lt. “Voodoo” Zazeela), MAKO 21 were to arrive in Gardez for immediate insertion into the Shahi-Kot Valley. MAKO 30 planned to establish an observation point on the peak of Takur Ghar, which commanded the Shahi-Kot valley. Due to time constraints, a helicopter insertion would be needed for the team to reach the peak before dawn. The Advanced Force Operations (AFO) suggested insertion at a point 1,300 meters (4,300 ft) east of the peak, but due to a B-52 bomber sortie in the area, the team was told to turn back and land at the airstrip near Gardez. Further complications arose as they began to lift off again when they were delayed a second time due to an air assault in proximity of the LZ. With the threat of daylight getting near, the teams chose the peak itself as the insertion point.[1]

The two teams were picked up by two MH-47 Chinook helicopters of the 160th Special Operations Aviation Regiment, Razor 03 and Razor 04, at 11:23 PM on March 3. However, Razor 03 experienced engine difficulties, and two new MH-47s were dispatched to replace the original helicopters. This delay meant that the SEALs could not be inserted into the landing zone (LZ) east of the peak until 2:30 AM on March 4, with not enough time to reach the peak before daylight. In the fractured command situation at the time, Blaber (SOF TF Commander) was not notified that the SEALs were planning to insert at the peak in order.

An AC-130 gunship, Nail 22, flew a reconnaissance mission over the peak prior to the landing and saw no enemy activity, but it was called away to support other troops before Razor 03 and 04 arrived at the landing zone (LZ). At around 0245 hours, Razor 03 landed at the LZ and was immediately struck in the left side electrical compartment by a rocket-propelled grenade (RPG). The stricken helicopter took off, but Petty Officer First Class Neil C. Roberts fell out of the open ramp. Razor 03 attempted to return and retrieve him, but the damage prevented proper control and the helicopter was forced to crash-land in the valley about 11 kilometers (7 mi) away. Razor 04 returned to the peak to attempt to rescue Roberts, offloading MAKO 30. The team came under immediate fire, and Air Force combat controller Technical Sergeant John A. Chapman was killed and two SEALs wounded. Mako 30 was forced off the peak due to its losses and requested the assistance of the Rangerquick-reaction force located at Bagram Air Base, led by Captain Nate Self.

The quick reaction force (QRF) consisted of 19 Rangers, a Tactical Air Control Party (TACP), and a three-man USAF special tactics team (PJsand Combat Controllers) carried by two Chinooks, Razor 01 and Razor 02. Due to satellite communications difficulties,[2][3] Razor 01 was mistakenly directed to the “hot” LZ on the peak at 33°20′34″N 69°12′49″E. As Air Force rules prohibited AC-130 aircraft from remaining in hostile airspace in daylight after the crash of an AC-130 during the Battle of Khafji in the Gulf War, the AC-130 support protecting Mako 30 was forced to leave before Razor 01 reached the LZ. Further communications difficulties meant that the pilot of the AC-130 was unaware that Razor 01 was incoming. At approximately 0610 hours, Razor 01, under the command of Captain Nate Self, reached the landing zone. The aircraft immediately began taking fire, and the right door minigunner, Sergeant Phillip Svitak, was killed by small arms fire. An RPG then hit the helicopter, destroying the right engine and forcing it to crash land. As the Rangers and special tactics team exited the aircraft, Private First Class Matt Commons, posthumously promoted to Corporal, Sergeant Brad Crose, and Specialist Marc Anderson were killed. The surviving crew and quick-reaction force took cover in a hillock and a fierce firefight began.

Razor 02, which had been diverted to Gardez as Razor 01 was landing on Takur Ghar, returned with the rest of the quick-reaction force at 0625 hours. Razor 02 inserted the other half of the QRF with its force of 10 Rangers at an “offset” landing zone, down the mountain some 800 meters (2,600 ft) east and over 610 meters (2,000 ft) below the mountaintop. The Rangers’ movement up the hill was a physically demanding 2-hour effort under heavy mortar fire and in thin mountain air. They climbed the 45-70 degree slope, most of it covered in a meter (3 ft) of snow, weighted down by their weapons, body armor and equipment. By 1030 am local time, the men arrived completely exhausted, with the enemy at the top of the hill a mere 50 meters (160 ft) from their position. As the ten men of Razor 02 arrived, the Rangers prepared to assault the enemy positions. As the Air Force CCT called in a last airstrike on the enemy bunkers and with two machine guns providing suppression fire, seven Rangers stormed the hill as quickly as they could in the knee-deep snow – shooting and throwing grenades. Within minutes, the Rangers took the hill, killing several al Qaeda fighters.

The force was able to consolidate its position on the peak. An enemy counterattack midday mortally wounded Senior Airman Jason D. Cunningham, a pararescueman. The wounded were refused medevac during the daylight hours, due to risk of another downed helicopter. However, Australian Special Air Service Regiment (SASR) soldiers, along with US Air Force Combat Controller Jim Hotaling, had infiltrated nearby prior to the first helicopter crash as part of a long range reconnaissance mission. They remained undetected in an observation post through the firefight and CCT Jim Hotaling proved critical in co-ordinating multiple Coalition air strikes to prevent the al Qaeda fighters from overrunning the downed aircraft. This, plus the actions of the two SASR operators working with the 10th Mountain, earned the commander of the Australian SASR force in Afghanistan the U.S. Bronze Star for his unit’s outstanding contribution to the war on terrorism.

At around 2000 hours, the quick-reaction force and Mako 30/31 were exfiltrated from the Takur Ghar peak. As a result of this action, both Technical Sergeant Chapman and Senior Airman Cunningham were awarded the Air Force Cross, the second highest award for bravery. U.S. and Afghan sources believe at least 200 al Qaeda fighters were killed during the initial assault and subsequent rescue mission.

It is not certain whether the sailor died immediately or was killed by opposing fighters. There is a possibility that Roberts was captured by the al Qaeda fighters, and executed later with a single shot to the back of the head. (One of the feeds showed a group of 8–10 fighters huddling around what appeared to be a body; both GRIM-32 and MAKO 30 noted that an infrared strobe light (IR strobe) was active, a video feed showed the fighters passing the IR strobe around.)[4] This report has not been confirmed. MG Frank Hagenbeck did confirm that al Qaeda fighters were seen (on live video feed from a Predator drone orbiting the firefight) chasing Roberts, and later dragging his body away from the spot where he fell. Another feed from the same Predator showed a puff of heat [from a rifle] and the indistinct figure in front of it fall.[4] Also, the quick-reaction soldiers reported fighters wearing Roberts’ gear and finding “a helmet with a bullet hole in it, [from which] it was clear the last person [Roberts] to wear it had been shot in the head”.[5] Other reports have Roberts surviving for nearly an hour and inflicting serious casualties on opposing forces with his pistol and grenades before his death.[6]

Predator drone footage also shows the possibility that Chapman was alive and fighting on the peak after the SEALs left rather than being killed outright as thought by Mako 30. A man was seen fighting in a bunker against multiple enemies until hit by an RPG. If this man was Chapman, he succumbed “a mere 45 seconds before… Razor 01 appeared over the mountaintop”.[5]

Note: A paper written by Col. Andrew Milani (Former commander of the 160th Special Operations Aviation Regiment) and Dr. Stephen D. Biddle entitled “Pitfalls of Technology: A Case Study of the battle of Takur Ghar” noted that the Predator was on station 90 minutes after Roberts had fallen; the images that were shot before the Predator had arrived were shot by GRIM-32’s Infrared Cameras,[7] although this has not been confirmed by commanders.

There are no reviews yet.